This is an edited version.

AH, NK and I birded at Bidadari this morning .. yeah we've been out of action for far too long. From our short list of 32 species, here are some of the highlights:
Seen also were 2 Tanimbar Corellas. Pardon the pun, but in the still of the morning their squawkings would have made some turned in their graves! One of the birds was later seen chasing away 2 stubborn Dollarbirds. AH was fascinated by a male Brown-throated Sunbird ... it stopped calling and remain 'glued' to its perch even when we closed in. Last but not least, we were surprised to find not one but four Common Hill Mynas at Bidadari.

Apart from the Crested Honey Buzzard, there was also an immature White-bellied Sea Eagle and one unidentified raptor. 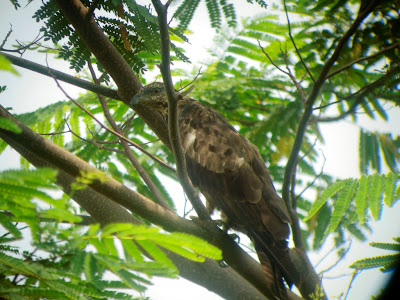